Breaking News
In view of the latest Government advice on dealing with the CoVid19 outbreak, and after discussing the situation with Sandra for our 2nd Team match and the County Mens' Seniors' Captain, Caroline and I wish to announce that our Senior Ladies matches in April are now cancelled.
We are hoping that the venues will agree to host us in 2021 but that has yet to be negotiated.


New from 2020, the Seniors Section is now open to everyone over 50 regardless or whether they have previously or are still playing for Gloucestershire County 1st or 2nd teams and are interested in playing competitive scratch golf either in medal, foursomes or greensomes formats.

The programme of events / results for 2020 are as follows;

Format - 5 Foursomes matches off scratch and possibly handicap depending on players competing. Captains to decide on the day.

Format - 5 Foursomes or Greensomes matches - format to be decided on the day. Shots may be negotiated between the 2 Captains if applicable.

Stinchcombe - Elderberries competition and lunch  The annual friendly get-together, mainly for those who have previously played for the County First and Second teams, for a one day foursomes event for all those interested, regardless of handicap, to be held on Wednesday 22nd July at Stinchcombe Golf Club. Playing for the Armada Salvers. A great opportunity to reminisce and catch up with old friends!

Format - foursomes stableford (high/low combination) with start times from 9.30 a.m. This will be followed by lunch and prizes.

The total cost of the day will be approx. £30 to include golf, lunch and dessert, coffee and prizes

Match vs. Hereford and Worcs Seniors - at Ross On Wye Golf Club on Sunday 5th July at the Herefordshire GC  5th August.

Time to be confirmed. This is a new fixture which was first added in 2019.

Format - greensomes matchplay event off scratch with 5 pairs per side. (Format may change at the Captains discretion as fixture evolves)

New event for 2020 South West Seniors Gross team Competition - to be    hosted in rotation around the SW Counties. Gloucestershire to host in 2020 at Bristol & Clifton GC - date tbc .

Format - a team medal event with each county supplying a team of 6 people and the best 4 gross scores to count from 6. Further details to follow.

Format - A round robin event against the other South West Counties with 3 scratch foursomes matches played morning and afternoon on the Monday and Tuesday and finishing with the last match on Wednesday morning, followed by a trophy presentation.

For the above events, anyone interested in playing should make themselves known to the Captain, who will equally endeavour to contact by email all those from clubs that have either single figure or low teens handicaps, to ask for availability at the start of the golfing season.

In addition there are a number of other Seniors events that can be entered on an individual basis as follows; 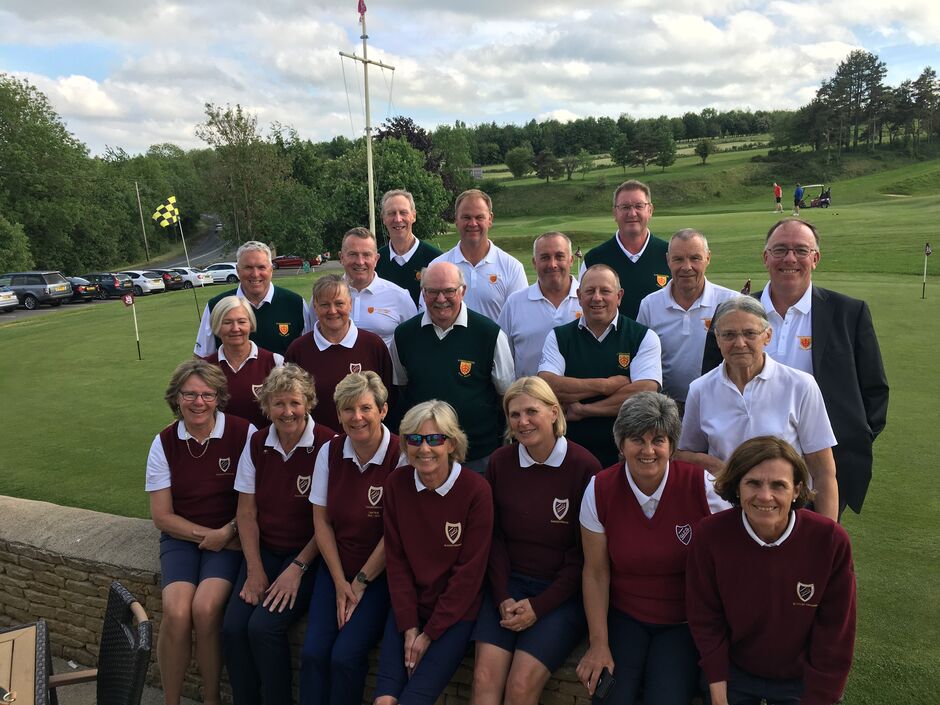 "A reversal of fortunes this year as we agreed to have a change of format and play a 4bbb stableford match play game. The weather was kind to us, albeit a bit overcast and slightly muggy, and it wasn’t until we were consoling ourselves with an after match drink that the sun finally came out. Nevertheless it was a very enjoyable match played in good sprits with a lot of keen banter. Bizarrely it was their ‘slightly ineligible’ ringer in Tim Clink partnered with Malcolm Lewis that gave us our only victory!

Next year we hope to have this fixture a bit earlier in the season so that it gives us a good pre-season warm-up rather than being in the middle of the year when it tends to clash with other fixtures. It remains to be seen whether we keep the same format though!

My thanks go to all the players for putting up a good fight and to Cirencester Golf Club for being such good hosts and allowing us courtesy of the course which was in fine condition and a credit to the greens team. I can certainly recommend the profiteroles!"

The annual friendly get-together for a one day foursome stableford (hi/lo combination) event for all those interested, regardless of handicap -  A great opportunity to reminisce and catch up with old friends! 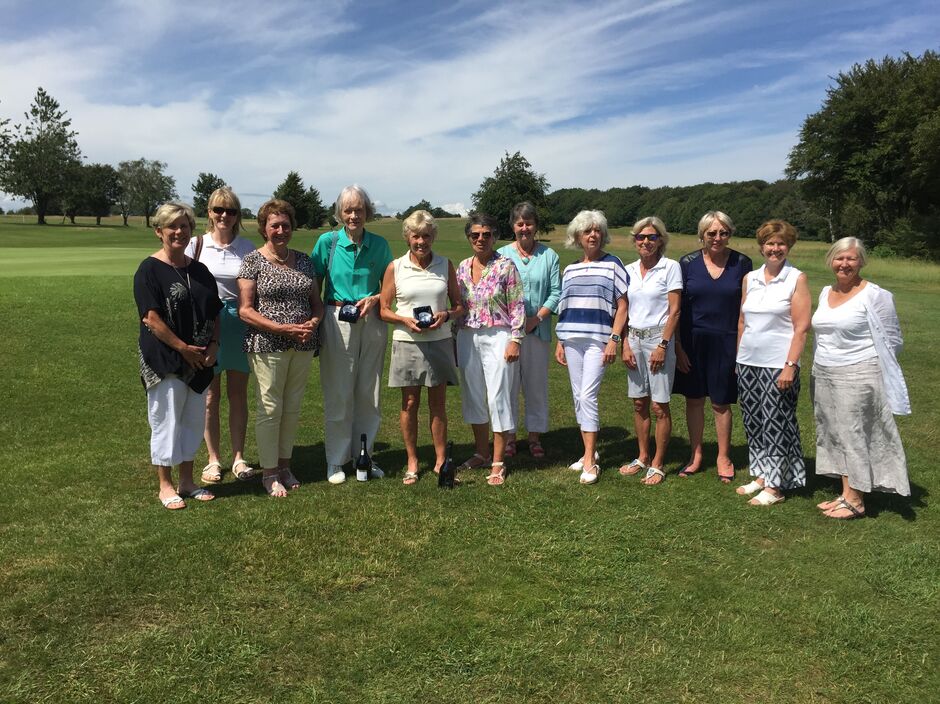 A small but perfectly formed group of ex-County Senior Ladies got together at Stinchcombe Hill GC today to play the annual friendly hi-lo foursomes for the Armada Dishes, presented by Val Sprott.  (Loving that pose Glo!)

Ann Manley from Henbury GC and Marion Jackson from Bristol & Clifton GC were the winners with 34 points followed closely by Alison Hooper from Henbury GC and Frances Lindley from Minchinhampton GC on 33 points. We were unfortunately missing several players through injury and fears over the hot weather but I have to say the Club looked after us extremely well and our early start at 9.30 and quick round in just under 3 hours meant that we were in and admiring the lovely weather from the very nice shade of the bar before it got too hot! Not bad for a bunch of oldies! 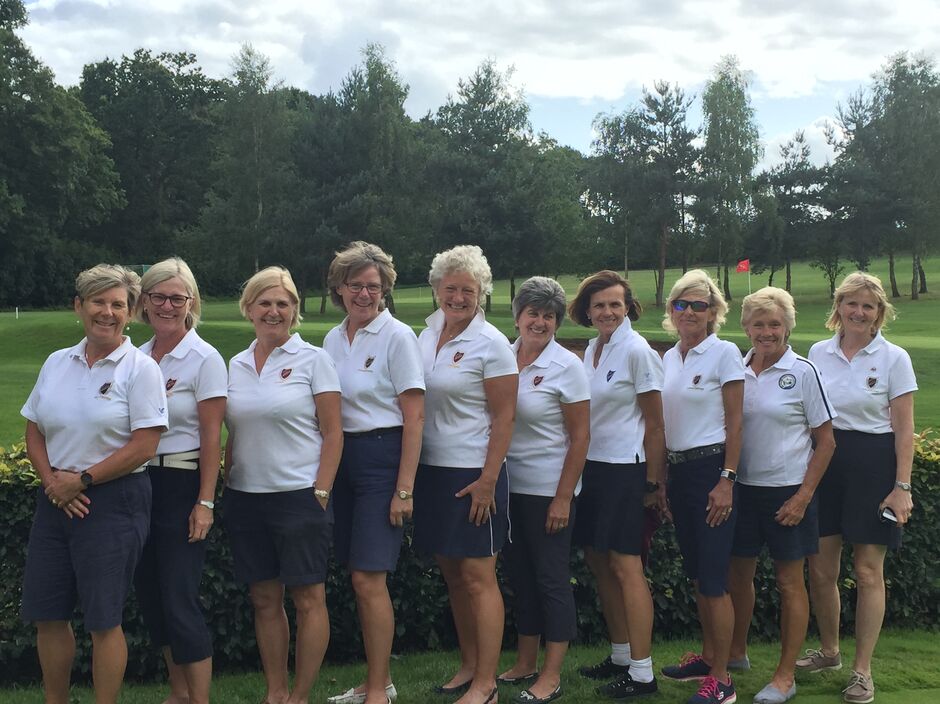 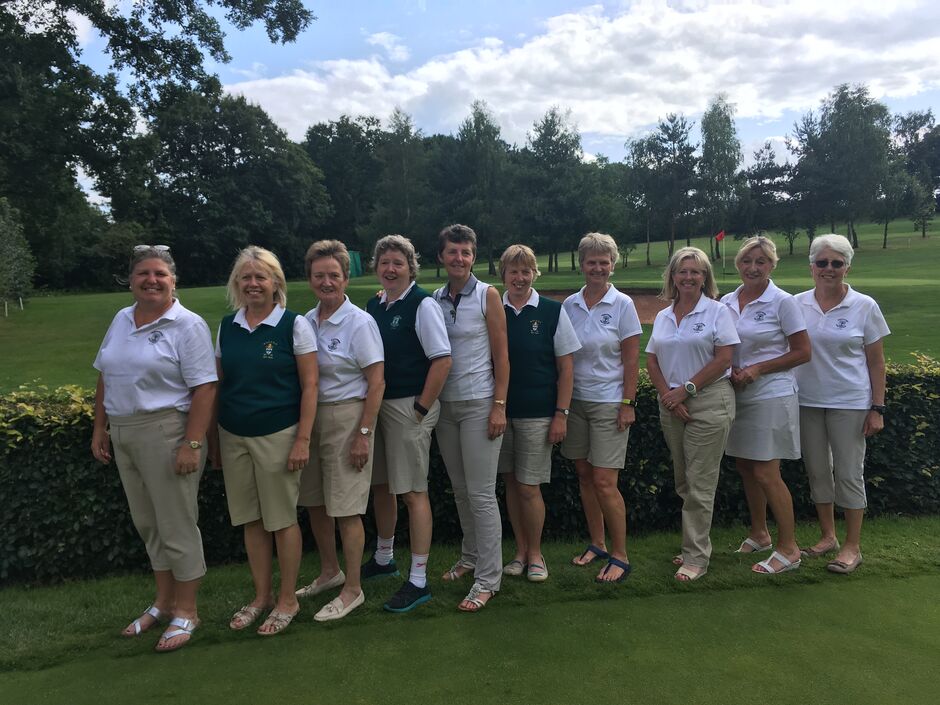 This was our first ever ‘Seniors’ fixture against Worcestershire & Herefordshire and it was a really pleasant surprise for me as Seniors Captain to find out that my opposition Captain had also been my opposition 1st team Captain back in 2011/12. So, it was only fitting that we played together and did a lot of catching up.

As we had all travelled a long way we felt it better to opt for a Greensomes format but taking a minimum of 6 drives each so we all got more of a game. Ross was in lovely condition and the weather was just right so it was a perfect day for our first encounter.

The first pairing of Corrrine and Caroline were up against their best pair with Denise being a home player and the local knowledge paid off as they were victorious 3&1.

Paula and Emma had a closely fought match coming home winners 2&1 and Andra and Ali fought all the way to the last halving their match. Ann and Louise and Jan and I both managed good wins on the 16th, cleverly avoiding the trek up the last hill on the 17th.

Mine and Jan’s match in particular had a major highlight on the 7th as 2 very close tee shots from us (which would have got at least one 2!) was trumped by Angie Taylor’s hole in one. A big thank you goes to their Lady President who organised a glass of celebratory fizz for us all after the match.

All in all, it proved a very interesting and enjoyable day as we now understand how vets/seniors work in the Midlands areas and our fixture for next year has already been booked for Sunday, 5th July at the Herefordshire where I am sure next year the H&W ladies will be up for revenge!

Interestingly their matches are normally 8 pairs a side so I will be needing more players next year so all you over 50’s who fancy playing scratch matchplay please let me know! 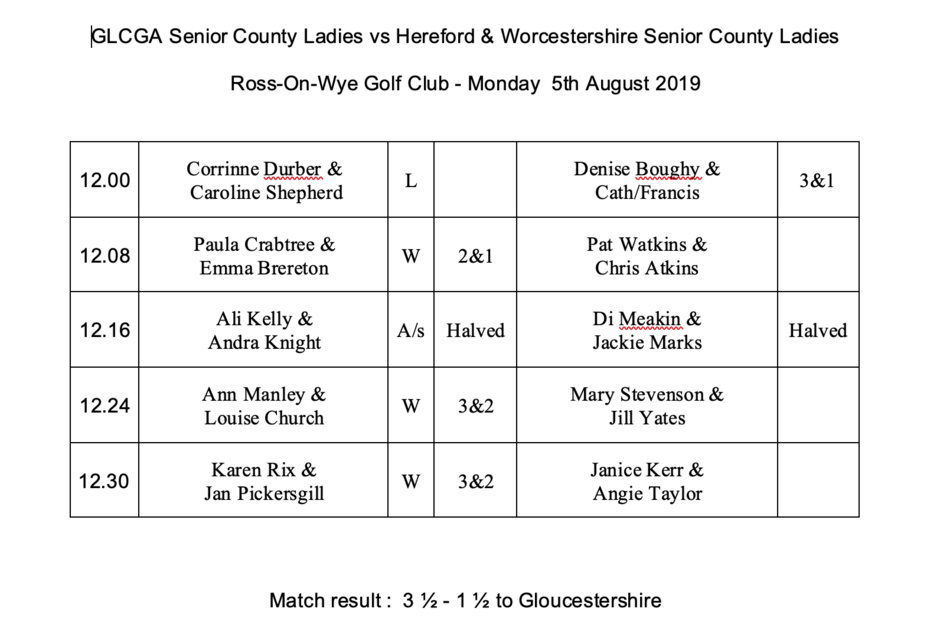 A round robin event against the other South West Counties with 3 scratch foursomes matches played morning and afternoon on the Monday and Tuesday and finishing with the last match on Wednesday morning, followed by a trophy presentation.

I will do my best to contact by email all those that are eligible, to ask for availability at the start of the golfing season. If you feel I have missed anyone off the list please feel free to contact me on : rix.ashworth@blueyonder.co.uk or 07831 895284.

Unfortunately the Seniors or Elderberries as some like to call us did not fair as well as the girls at Delamere. Devon were hosting the tournament at Torquay Golf Club and a more friendly welcome we could not have wished for. The weather was biblical in parts but we managed to complete which was a miracle and we were all impressed with condition of the course and how it held up in view of the amount of rain that fell. I think the gale force winds at other times helped!
Our first match was against current holders of the ‘baffie’ for the previous 2 years, Dorset, which we narrowly lost 2-1, with one match going down the 18th. We then won against Devon, with another match going down the 18th. We then finally lost out to Wiltshire with 2 matches going down the 18th. All very close stuff. Devon, however overturned Dorset in their last game on Tuesday and as Wiltshire had halved with Dorset, Devon were the overall winners and we got the wooden spoon :(  However it is some consolation that we were the only ones to bet the winners! 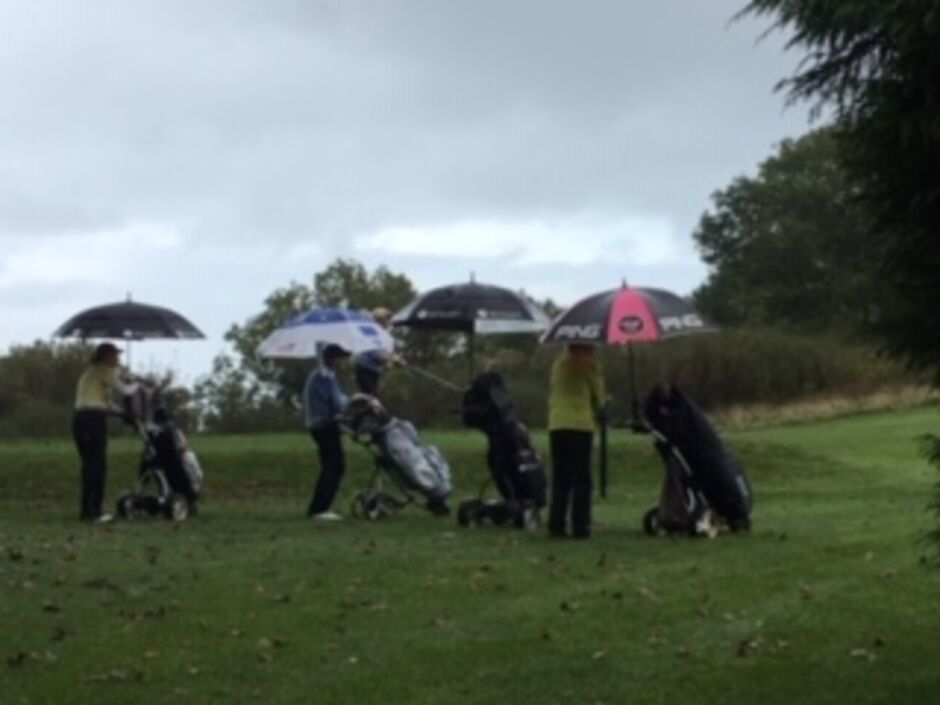 We were also unfortunately missing 2 teams this year in Somerset and Cornwall as the lack of 'ex County' seniors that want to play is drying up due to the sheer success of the junior development programmes going on in the counties (and long may that continue!). Therefore we have as a group now finally decided that we will open this up to all seniors over 50 wishing to take part in competitive scratch foursomes golf regardless of whether they have or are still playing mainstream 1st team golf. We hope therefore that next year will will back to a full 6 counties taking part. 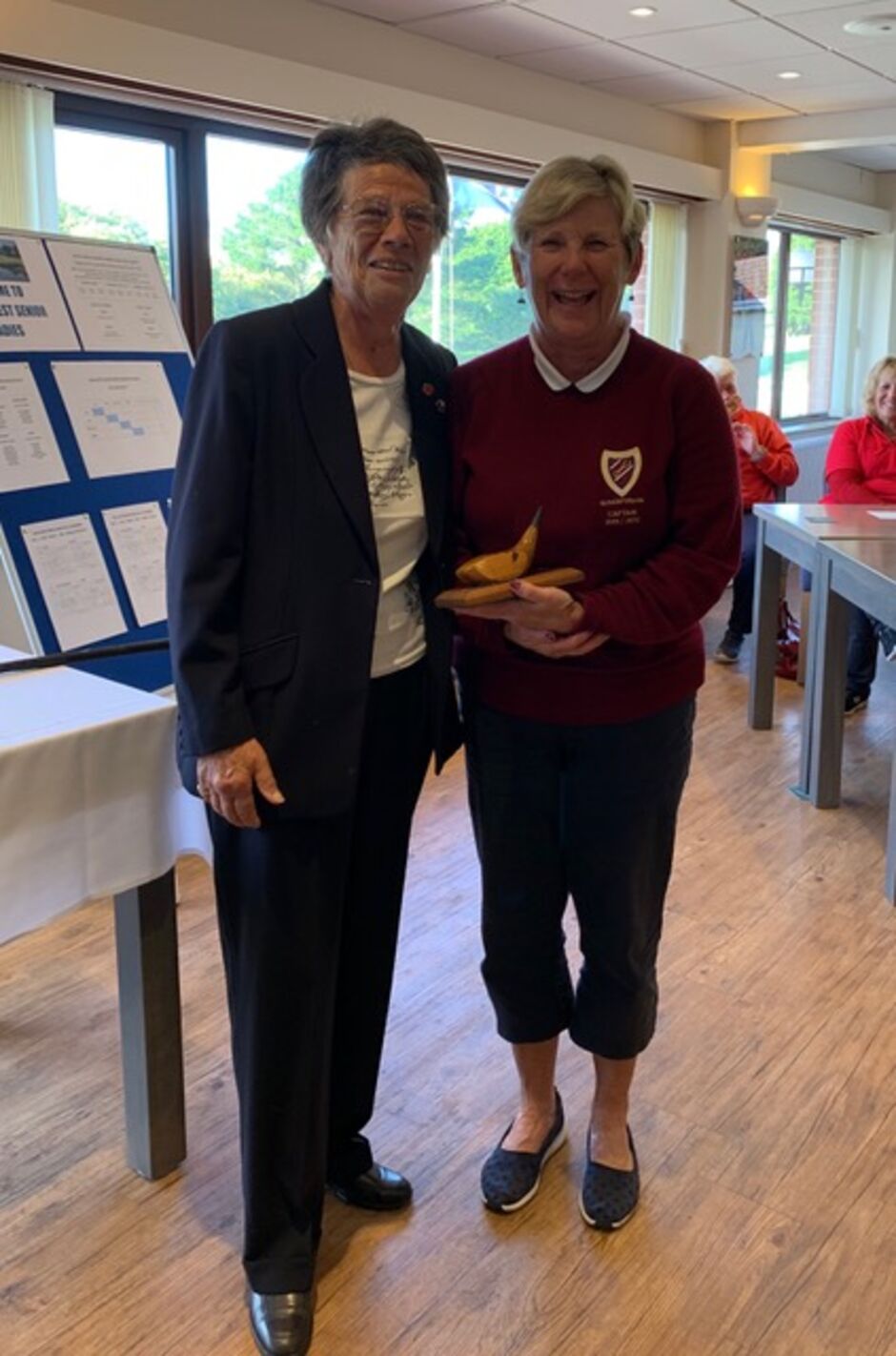