After a stormy couple of days, everyone was hoping for a dry afternoon for the Championship and the girls were lucky - they more or less got around the course without any rain but by the time they navigated their way up 'cardiac hill' the wind had picked up and whilst the views from the top were fantastic, they definitely needed another layer of clothing!

With reconfigured holes, the course had just been reassessed and some of the girls' GPS devices had not been updated, but luckily most of them took heed of the advice that Martin Evans, our starter had given them, to take note of the fairway markers and not use their GPS measurements.

In order to comply with COVID restrictions, spectators were not allowed on the course, so quite a bit of nailbiting was undertaken in the clubhouse whilst parents waited for the girls to come down 18.

With referees, Bob and Carol Newton, plus Debbie Casling, Jamie McCormick and Alex Saunders out on the course to make sure the girls were all OK and to maintain the pace of play, it wasn't long before all the girls were verifying their scores with one another back in the clubhouse.

With a gross 73 (+1), Issy Hopkins (Bristol & Clifton GC) was crowned our 2020 Champion and our U16 Gross Winner.  Her score was also a new ladies course record following the course's reassessment after the modifications which have taken place over the past year.

With a gross 75 (+3), Elin Tynan (Minchinhampton GC) was Runner Up to our Champion, she won the Townsend Salver as our Nett Champion and is also our U16 Nett Winner with a nett 69.  Elin also won the Little Spots Salver which goes to the Stableford winner which we run alongside the Championship medal competition.

Neve Jeffery (Knowle GC) was our Best Nett Runner Up and also the U14 Gross and Nett Winner.

Thanks go to Keith Wood and his team at Gloucester Golf Club for their great hospitality, allowing us to play the course and for keeping us fed and watered; to Bob and Carol Newton for refereeing and providing invaluable advice on the course, to Martin Evans who was our Starter for the day, and Debbie Casling, Jamie McCormick and Alex Saunders for making sure the girls were safe whilst out on the course.

The competition results can be found by clicking HERE

Prizes are as follows - Girls may only win one voucher (highest value) i.e. a category voucher may be awarded to the next placed girl.

Due to COVID restrictions we were unable to present any of the trophies to the winners, but we hope we will be able to do so at the Jenny May Day in October.

Well played girls and I hope you all enjoyed your afternoon's golf at Gloucester GC. 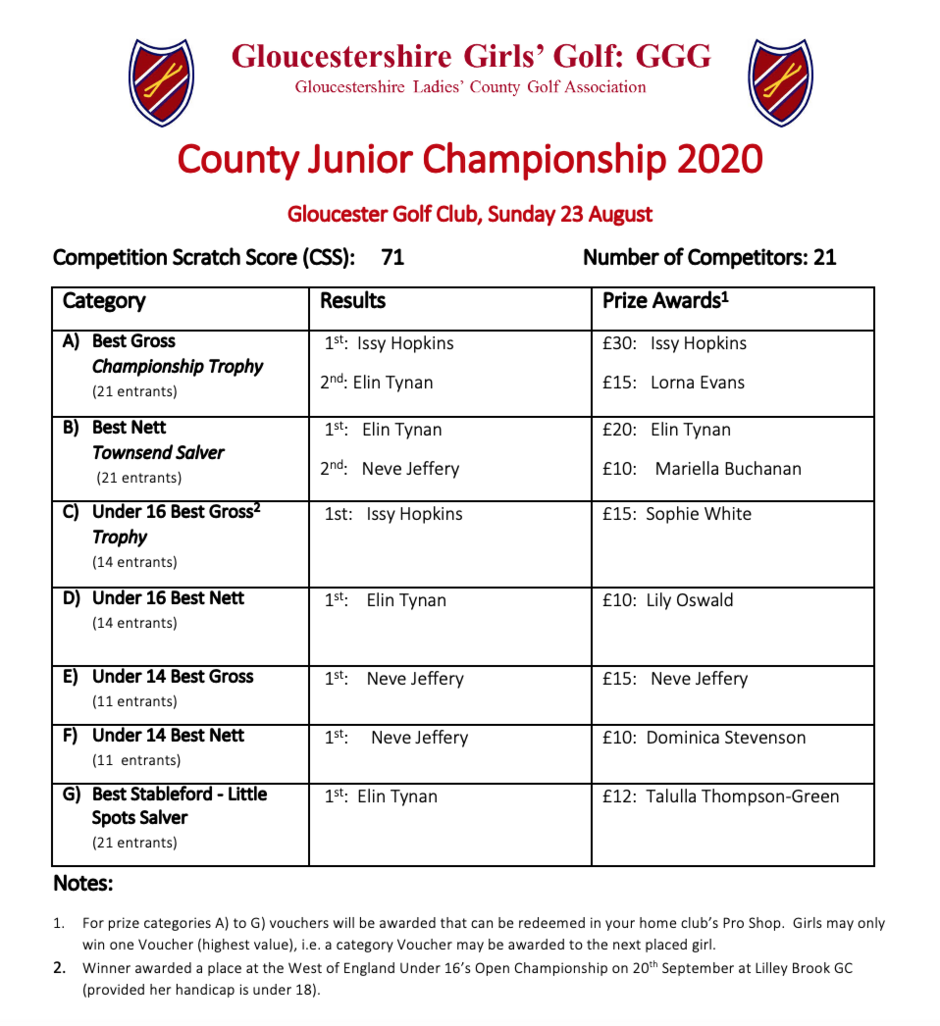 Following last year’s disappointing cancellation of our match against the Gloucestershire Boys due to bad weather, the Girls were really looking forward to playing them this year.

On a dry but chilly morning (and yes we did have a bit of rain!), the six pairings were all ready to do battle against the Boys.  Captain Izzy Lloyd paired with ‘rookie’ Lily Oswald had to play Ashley Millington on his own as the Boys had a few injuries and even though he was on his own, he wasn’t intimidated by the Girls winning on the last with a birdie.

Our second pairing of Chloe Lloyd and another ‘rookie’ Elizabeth Robbins were firing on all cylinders and soon racked up an impressive win of 8&6 over Dylan Duffy and Charlie McKinnes.

Lorna Evans and Millie Gait were playing the Boys Captain Lewis Stalley and Charlie Saxton and their match was really tight throughout walking off the 18th with a deserved halve.

In the 5th match, club mates Lily Whitaker and another ‘rookie’ Lucy Mabley found themselves playing Jamie Berry and Danny Townsend who also play at Minchinhampton.  Another tight match saw the four of them heading down the 18thand that’s when the boys stepped up and secured the win but not without their club mates pushing them all the way.

So at this point, the match was tied with the final pairings match being the decider.

Rhian McGinley and Neve Jeffery were playing Sonny Nangle and Adam Sutton both from Broadway.  There was lots of great golf played but the boys stepped up to the 18th tee, 1up and with Rhian’s ball going in the pond in front of the green, it was advantage to the boys, who won the hole to finish their match 2 up.

With a final score of 2½  to 3½  to the boys, it was then time to enjoy a lovely roast meal with chocolate cake which soon brought back smiles on the faces of the Girls.

For the ‘rookies’ the match was a great introduction to the County Girls team, with Lily Oswald saying: “Playing in the match against the boys was an amazing opportunity to play alongside some of the older, more advanced girls, especially Izzy. She was very welcoming and supportive throughout. Not only was I able to pick up some great tips, but I was also able to build my confidence. It was nice to play with some of the county boys too as we don’t often have this experience. I think that events like this are very beneficial to all golfers and it has been a privilege to play for the team. Thank you”

Thank you to Forest Hills GC who were great hosts, to the greenkeepers for preparing the course which was in incredible condition bearing in mind the dreadful weather we have had recently, the caterers who fed and watered the teams and to all the supporters, including some of the other Gloucestershire Girls as well as their parents who followed them around the course even when it rained!

The Girls are already looking forward to next year’s match, when hopefully the result will go our way …….

Please email News & Results for publishing on this page to: janicemsaunders1@gmail.com